The Call of the Open Sidewalk

So we've learned that an intelligence agency called the NSA that is run by one of the more popular countries has pretty much converted the Internet into a huge Super-Orwellian surveillance system. Breathtaking in scope but we more or less knew that already. Then last week we learned that we had to promote NSA to supervillian level status.

It turns out that the NSA has been actively working to degrade and destroy the use of encryption on the Internet. It appears in retrospect that they have been very effective at this. The best guess as to why they are doing this terrible thing is to make it easier for them to do surveillance. So not only is the NSA engaging in evil against the whole world, they are doing so for a reason that would only make sense in a Saturday morning cartoon. Presumably they were also planning to eventually use this advantage to steal all the money in the world, or at least to show everyone what the G.I. Joe's look like in their underwear...

The story so far:

A low level IT tech discovers that he has more or less been contracted out to Cobra Command. But this is no ordinary IT tech! Using his superior skill and wit he tricks the evil organization into giving him access to definite proof of their nefarious schemes. Taking this proof with him he goes on the run. This is with the knowledge that he will never see his girlfriend again and that he might actually die.

Again using his superior skill and wit the IT tech devises a way to leak the proof in a way that is impossible to ignore and that keeps him out of the way of retribution long enough to make such retribution pointless.

Now it is up to the geekiest of the geeks to save the world! Those few cryptographers not yet co-opted by the evil organization are banding together to meet this threat. The fate of the world literally rests on their shoulders!

The 12+12 DTV Solution: Another Implementation

A friend and myself built more or less the same antenna as described previously: 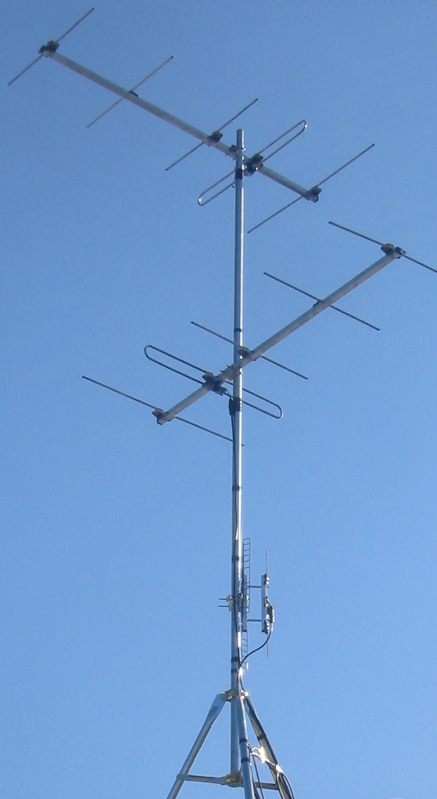 In this case the antennas were all new. The interesting thing here is that the cost of the three simple antennas was actually somewhat competitive with the cost of a single complex antenna ($20+$20+$13=$53CAN). There is something to be said for creating a complex antenna out of simple parts particularly in the case of a difficult RF environment.

Here are the results:

The results for the two VHF-high band channels (7,13) are a bit worse than those described for the first antenna. That's probably because the new project used 5 element antennas. The original one used recovered 11 element antennas. Since we were paying for the antennas we settled for good enough.

These results were measured after a 4 way splitter as was the case with the first antenna. The new antenna site was 1 km west of the old one.

This was in response to someone on Reddit who suggested that software patents on video compression methods were somehow more reasonable than other software patents because it was hard to come up with such methods. It seemed blogworthy.

Digging a trench is really hard too. How long does the trench have to be before I can get a patent and prevent anyone else from digging a trench that long?

Video compression patents are an excellent example of why software patents don't really make sense. If I somehow decode some compressed video the result is a bunch of coloured dots on a screen representing a moving image. The output is pure unmitigated data.

Now the people that believe in software patents will tell me that I can't use my computer to interpret the H.264 bit stream in the H.264 way without the permission of the 1600 or so patent holders. I can interpret it in an infinite number of other ways. That is OK. Just not the one way. That is even if I have read the standard and do the programming myself. There is just something magic about the one interpretation.

I happen to believe that the invention of the general purpose computer is on a similar level to that of the invention of fire. If I believe in software patents I also have to believe that I can only use this incredibly powerful invention in very circumscribed ways. Imagine the reaction if the people that used to spend time tenderizing meat with rocks tried to get a royalty from the people using fire to do the same thing. The fire users might patiently explain that the world had changed in a very fundamental way. They might instead suggest that the people trying to make their wonderful new thing as useless as the old thing just go fuck themselves. I will leave it to you to decide which group I fall into...

At any rate, suggesting that software patents are real in some way is deeply offensive. You should expect to get called on it...

Here are the other articles in this series: 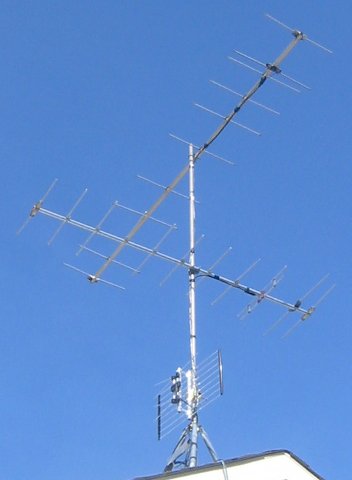 The support structure is a 10 foot chain link fence top rail bought at the local home improvement store. It is attached to the roof with a tripod sold as an antenna support. The top antenna points at channel 13. The middle antenna points at channel 7. The bottom antenna (low gain UHF band) receives channels 27, 35, 40 and 51 and points between the transmitters. The cables are held to the mast with multiple wraps of black vinyl electrical tape, which seems to be the local custom.

Here is the place where the signals are combined:

Here is the place where I ground the antenna: 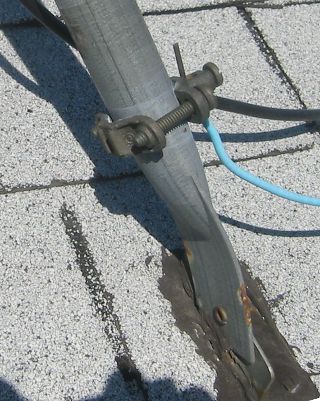 The requirements for grounding things like TV antennas are different from place to place. If you can't manage to ground it exactly as required, don't just give up. Ground it as best you can. You should ground the outside conductor of the cable where it comes into the building as well. You can buy a thing called a grounding block to make this convenient.

As the digital TV conversion is finally complete in my area I can provide results:

Strength is proportional to the level of the signal. Quality is a measure of how certain the demodulator can be that a particular bit is a 0 or a 1 (higher is better). Channels 7 and 13, each with a dedicated high gain antenna, are as would be expected quite good. The rest of the channels are fairly good with the exception of channel 51. I have no real explanation for this. The transmitter is less than 3 km away. The quality of channel 40 is fluctuating. That is probably due to either noise or a reflection that is changing faster than the receiver can compensate.

Creating a usable over the air (OTA) TV antenna system is one of those things that usually involves a significant amount of experimentation ... but you have to start somewhere.

A good place to start is with the worst signal you want to receive. Here is the important bit from my TV Fool report (as discussed in a previous post):

The farthest transmitter in our list of desired channels (7 13 27 35 40 51) is channel 13 at 41km (25.2 miles). Applying a realism filter to the claims of the people that make TV antennas, we come up with a requirement for some sort of medium gain antenna. How about we specify an antenna that does both our bands of interest and just point it at the channel 13 transmitter? This, by the way, is all we have to do in most situations. Deal with the worst and hope for the rest. We would then have the close 27 40 and 51 directly behind the transmitter. Good. Most antennas work reasonably well to the rear. We unfortunately have 7 and 35 that are not so close and they are pretty much at right angles to the antenna. Most antennas are quite good at rejecting signals to the side. The solution here is to rotate the antenna so it points between 13 and 7/35. Lower gain antennas are better at receiving stations over a wider angle so we might be better off downgrading to a low gain antenna ... an unhappy but common compromise.

If I was in a more rural environment I might be done. I am instead in what might be termed a high density suburban area. My neighbours all have cable and do not have to bother with interference caused by their electronics. I am not blameless with respect to interference either. Low gain antennas are also good at receiving noise over a wider angle. I used to use a single low gain antenna in the analog days and had to live with all the received noise.

Before we unleash the dogs of complexity we might want to think about our available assets. I just happen to have a couple of high gain recovered antennas that are optimized for channel 12 and were expected to work reasonably well on channel 7.

Channel 7 is on our list. So that just works. Channel 13 is only a few percent different from channel 12 in terms of radio frequency. It would have a lot of gain when used on channel 13. Unfortunately the 13 and 7 transmitters are are at right angles so a single high gain antenna is the last thing we want here.

We have two antennas available. I didn't pay anything for the antennas. Why not point each antenna directly at a transmitter?

In the analog days the answer to the proceeding questions would of been; ghosts otherwise known as reflections. The antenna pointing in the wrong direction for the desired channel would receive reflections quite well. Special filters were required to eliminate these reflections. Digital TV is very good at cancelling out these reflections (relevant post). As a result, multiple antennas can work quite well here in the 21st century.

You can combine the signals with a splitter/joiner:

If your antennas are pointing in more or less the same or opposite directions you should make the cables between the antennas and the joiner the same length. That is in the hope that the two signals will add together rather than cancel. In our right angle case it doesn't really matter. If you have matching transformers on one of both of the antennas you should reverse the antenna connections on one of them to see if things get better.

That takes care of channels 7 and 13 leaving 27, 35, 40, and 51. Here we finally get lucky. With 7 and 13 being in the VHF-hi band and 27-51 being in the UHF band we can use a band separator/joiner. In this case we want a UVSJ (UHF, VHF). The band separator/joiner will completely isolate the 7 and 13 antennas which allows us to consider the problem of receiving 27-51 with no consideration of what we have done so far. Channel 35 is the only remaining transmitter that is not right next door so we just use a low gain UHF band antenna with the hope that we can find a magic angle that will work for all 4 channels. This might work because the UHF band is at a higher frequency where there is less woman made noise.

We end up with this: 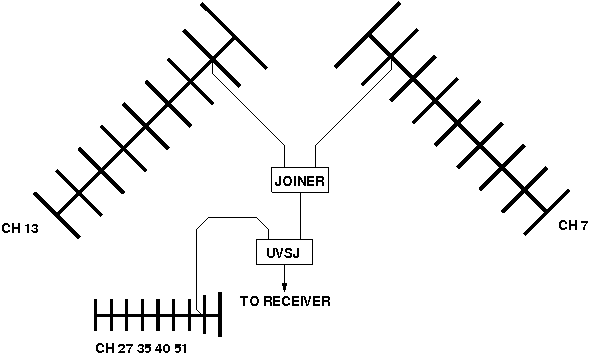 This was a very specific example. The point here is that this can be a reductionist process. That can make this a lot of fun for those that are into that type of thinking.

We now have a configuration we can build and try out...